Sharing Our Stories: Alumnae Stories from the Pandemic 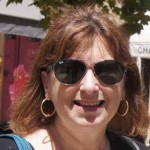 Fredda Klein Sacharow ’71 graduated from Douglass College with a degree in journalism and most recently worked for “Rutgers Today,” until she lost her freelance assignments in the wake of the COVID-19 pandemic. She recently connected with alumnae on the AADC virtual event, “Tea with Tina.” Here is her story, shared on July 9, 2020.

“I miss those adrenaline-pumping deadlines more than I ever thought I would.”

For the first time in nearly five decades, I’m facing no deadlines. Through a career as a reporter, editor and then freelance journalist, I’ve faced monthly, weekly and daily deadlines, racing against time to deliver stories to editors of assorted newspapers and magazines.

I’ve covered the aftermath of civil war in Romania, a visit by the king of Spain to a historic synagogue in Madrid, the legacy of Danish resistance to the Nazi occupation 50 years later, the journey of a family of Soviet dissidents to Israel after years of struggle. I’ve written seven editorials a week on local, state and national issues, and not covering COVID-19 is one of my hardest assignments.

After graduating from Douglass with a journalism degree in 1971 – it was the era of “All the President’s Men,” with reporters as the new super heroes – I set out to conquer the world, first as a general assignment reporter at a 6,000-circulation weekly in Millburn, NJ, and then as feature writer at a mid-sized daily in Burlington County.

I landed my dream job, at the New Jersey bureau of the Philadelphia Bulletin, only to mourn when that paper folded – an early and sobering harbinger of closures to come in the media world.

But I wasn’t done with the world of newspapers, and it wasn’t done with me – journalism, it turns out, is a hard habit to break. A job as managing editor of the Jewish Exponent in Philadelphia led to the post of editorial page editor of the Burlington County Times, and, more recently, as a writer (on staff and later as freelancer) for Rutgers Today, the online news publication of Rutgers University.

Interviewing students, faculty members, staff and alumni brought me into contact with some of the sharpest minds and most creative thinkers in the Rutgers community. For more than 10 years I was part of the university where it all began for me so many years earlier.

I had the joy of profiling Jacquelyn Litt, Ph.D., after she was named Dean of Douglass Residential College and professor of Women’s and Gender Studies and Sociology in 2010.

But alas, the coming of the novel coronavirus brought word that many of the departments at Rutgers were being forced to tighten their belts. For me the writing for this market has ended – temporarily, I hope, I hope.

So, what comes instead of deadlines? Catching up on long-neglected novels piling up on my night table. Recording videos of “Where the Wild Things Are” and “Miss Nelson is Missing” for the grandkids. Continuing to volunteer for Café Connection, a meeting place for patients with memory loss and their care partners (now moved online). And catching up with old Douglass pals and meeting new ones via “Tea with Tina,” a virtual AADC event organized by sister alumna Tina Gordon ’72.

And polishing – finally! – the children’s picture book that has been percolating in my brain for years. Now the hard part: finding a publisher in a world in which publishing has taken a brutal hit.

Yes, I miss those adrenaline-pumping deadlines more than I ever thought I would. They gave meaning to my days, shape to my weeks. But I’m optimistic that the eventual lifting of restrictions will give way to future assignments.

Until then, I’ll wash my hands, strap on my mask and marvel at the outstanding job my media colleagues are doing in the face of great dangers. They’re on the front lines as much as any other COVID-19 hero I could imagine.