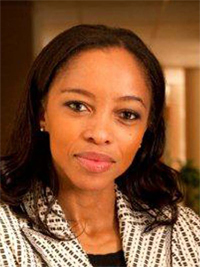 Phuti Mahanyele, Class of 1993, is passionate about working in investment banking and has become one of the most respected figures in the corporate world as Chief Executive Officer of Shanduka Group Ltd., a multi billion-dollar blue-chip company in South Africa. Named one of “South Africa’s Most Influential Women” last year, she was listed on the Wall Street Journal’s “Top 50 Women in the World to Watch” in 2008, and the “Most Influential Women in Government and Business by Financial Services” in 2009. She personifies the face of the woman African leader and hopes to inspire others through her achievements as a business leader.

She herself was inspired early on by her family and wanted to work in a business environment. Phuti came to Douglass College from Johannesburg, South Africa, at age 17 to get a strong educational foundation. She graduated from Douglass College with a bachelor’s in economics and earned an MBA from England’s DeMontfort University three years later. In 2008, she completed the Harvard Kennedy School Executive Education Global Leadership and Public Policy for the 21st Century program. Phuti says a strong work ethic and being surrounded by empowering people—including her parents—has provided vision and enabled her success. Working in investment banking, she says, is something she always wanted to do.

Phuti began her career at Fieldstone Private Capital Group in New York City, an international investment banking firm with a focus on energy and infrastructure, and quickly rose to become a Vice President. Later, she transferred to the firm’s South African office. Returning home was a pivotal moment. As she deepened her knowledge in investment services, she later became head of the Project Finance South Africa unit at the Development Bank of Southern Africa. Before becoming Chief Executive Officer of the Shanduka Group, Phuti joined a subsidiary, Shanduka Energy Ltd., in 2004 as Managing Director of the investment company primarily focused on electricity, oil and gas in Africa. After seven years with Shanduka, the charismatic and remarkable leader of the Shanduka Group, Cyril Ramaphosa, named Phuti to her current leadership position as CEO. She also serves as a board member on a number of Shanduka Group investee companies.

The opportunity for growth, challenge and power has positioned Phuti as one of a very small percentage of women in leadership positions in her native South Africa and in the world of finance. As a global leader, she hopes to truly be a global citizen and make Shanduka Group sustainable for the long term, responsibly, and while making a difference.

Phuti is involved in a number of activities with youth and mentors young professionals and students. Additionally, she is involved with the “Dignity Day” program which is led by Young Global Leaders of the World Economic Forum and focused on re-enforcing the values of dignity in young people.

In 2011, Phuti was the keynote speaker for the Rutgers Graduate School of Education’s kick-off celebration of the tenth anniversary of the annual study tour to South Africa, and received the Vision of Excellence Award for her extraordinary contributions to education and social progress for learners and communities in South Africa through mentorship and cultivating leadership for the next generation of business professionals. She is the recipient of numerous awards, including the Outstanding Businesswoman of the Year at the 2009 African Business Awards; the World Economic Forum’s Global Young Leader in 2007; and the “Top in Project Finance, 2003” award from the Association of Black Securities & Investment Professionals.

This entry was posted in Spotlight on Alumnae. Bookmark the permalink. Follow any comments here with the RSS feed for this post.
« Spotlight on Alumnae: Lois S. Weisman ’74
Douglass Society 2013 Honoree
2014 Alumnae Award Recipients to be Honored at the Founders Day Awards Recognition Luncheon »