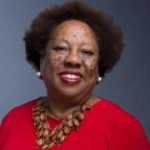 Karen McLane Torian ’73 is an outstanding leader who has demonstrated her commitment to the Associate Alumnae of Douglass College (AADC) with her service on the AADC Board and by devoting countless volunteer hours as a thoughtful and engaged member of the AADC, on committees, at events and programs, and as an active member of her class. Her loyalty, enthusiasm and service to the AADC has been admirable.

Karen’s leadership has no boundaries and her knowledge and sound decision-making greatly assist the AADC. In addition to her service as a Board member of the AADC, on the AADC Strategic Planning Committee and on other key projects, she has served as a leader of the AADC Black Alumnae Network for many years in various capacities. She has served as the Alumnae Representative to the Rutgers Board of Trustees. Karen also served as a member of the Douglass Fund Committee.

Karen brings creativity and enthusiasm as Chair of the AADC Black Alumnae Network Jewel Plummer Cobb Sisters Conference Committee and spearheaded the 2016 Conference celebrating the 35th anniversary of AADC BAN. As Co-Chair of the AADC Smart Talks, a component of the AADC Women’s Life-Long Learning Initiative, she successfully launched this new series that reinforces the AADC’s commitment to continuing education for women.

Karen has also shared her talents and her extensive background in construction. She played a key role in assisting the AADC with their partnership with Rutgers in the construction and planning of the Kathleen W. Ludwig ’75 Global Living Learning Center on the Jameson Quadrangle at Douglass in 2010-2014. She reviewed plans and provided important design feedback to the AADC that was provided to Rutgers.

She currently serves as the executive director of a faith-based non-profit organization that operates its programs in space provided by the Shiloh Baptist Church of Plainfield, New Jersey. The organization distributes groceries to approximately 150 families and serves 800 hot meals to individuals monthly, as well as providing clothing through a program called the Clothes Closet.

Karen has received numerous awards for her service and leadership. She received the AADC Alumnae Recognition Award in 1996 and she was presented with the 2018 Margaret T. Corwin Award, the AADC’s highest award for service, for her outstanding commitment and loyal, sustained service. In 2021, she was honored as a Woman of Achievement by the New Jersey State Federation of Women’s Clubs and Douglass Residential College in recognition of her career and non-profit activities and leadership.

A loyal supporter of the AADC Annual Appeal, Karen has also been a leader in donating to special campaigns and projects. Her wisdom, commitment and support will help ensure the strength of the AADC for generations to come.