Our “Legacy of Leaders” series highlights some of the many people whose dedicated work has been indispensable in getting the AADC to this magnificent milestone. They all have established an enormous legacy of leadership that will ensure the future of our sisterhood. Let’s celebrate them! 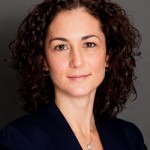 Lauren Nathan-LaRusso ’03 has demonstrated a keen interest in politics and public service that began while she was an undergraduate and served as President of the Douglass College Government Association. She has been active with the Associate Alumnae of Douglass College in leadership roles since she graduated in 2003 with a Bachelor’s degree in history and political science. She subsequently received a Master’s in Education from the Rutgers Graduate School of Education and earned her law degree at Seton Hall University.

Today Lauren is senior associate counsel in the New Jersey Governor’s Office, Authorities Unit in the State of New Jersey, where she has worked for the past four years representing the interests of the Governor across multiple state and bi-state authorities, including NJ Transit, New Jersey Sports and Exposition Authority, Cannabis Regulatory Commission, Gateway Development Commission, and the Port Authority of New York and New Jersey. Most recently, Lauren has led the Governor’s efforts to bid for the 2026 FIFA World Cup. She also held positions in private law firms in civil litigation and previously served as the outreach coordinator for former U.S. Representative Rush Holt.

The AADC has benefited from her acumen as an attorney and her dedication as a volunteer. She has served as Vice President of her class since graduation. She was elected to the AADC Board of Directors, served on the Executive Committee and was Secretary. Her legal experience and pragmatic insights were invaluable as a member of the AADC Bylaws Committee. In recognition of her work, in 2018 the AADC honored Lauren with an Alumnae Recognition Award.

In addition to being Vice President of her class, Lauren also co-chaired the AADC Young Alumnae Network. She has shared her enthusiasm and energy as a member of the Alumnae Reunion Committee and participated in numerous events for younger alumnae. She showed her dedication to the students of Douglass as an active sponsor in the former AADC Extern Program and as a key member of the former DART Program (Douglass Alumnae Recruitment Team), spreading the word about Douglass to prospective students. Lauren was honored in 2013 with the AADC Young Alumnae Mabel Award for her service and efforts to engage younger alumnae and develop programs.

Lauren is a loyal and generous supporter of the AADC Annual Appeal, and she has served as an Annual Appeal volunteer. Her generosity will help ensure the strength of AADC for generations to come.

Lauren is an outstanding role model. She has demonstrated how young alumnae can step into leadership roles and create a bridge to the future as engaged volunteers who help sustain the growth of our alumnae organization. We salute Lauren for nearly 20 years of dedicated service to the AADC.

If you are interested in getting involved with the AADC by serving on a committee, please send an email to douglassalumnae@douglasalumnae.org.