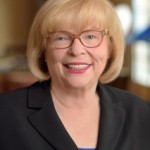 Sharon Matlofsky Karmazin, Douglass College Class of 1967, has impacted countless lives through her distinguished 30-year career in library leadership, philanthropy and as an award-winning Broadway producer. She has been an active, valued leader of the AADC for many decades and her loyalty has enriched our alumnae community.

With her Bachelor of Arts degree in English and a Master of Library Science degree from Rutgers’ School of Communication, Information, and Library Studies, Sharon embarked on a long and successful career at the East Brunswick Public Library. From 1968-1999, her library was considered the busiest library building in the State of New Jersey with the highest per capita circulation. She has been recognized with numerous State and National awards, including three John Cotton Dana Library Public Relations Awards from the American Library Association.

More recently, you might recognize Sharon as a four-time Tony Award-winning Broadway producer. She has produced plays on and off Broadway and in London as well as at New Brunswick’s own George Street Playhouse. Among her Broadway productions are “Ain’t Too Proud to Beg: The Life and Times of the Temptations,” “Dear Evan Hansen,” “Network,” “Burn This” and “The Band’s Visit.” She was also part of “Hedwig and the Angry Inch,” “Clybourne Park,” “Dirty Rotten Scoundrels,” “Metamorphosis,” “The Seagull,” “Altar Boyz,” and “Ragtime.” Sharon has graciously arranged for alumnae groups to attend her shows. These events often include the opportunity to meet the cast.

Sharon is the founder of the Karma Foundation, a philanthropic family foundation that supports arts and culture, education, literacy, health and human services, autism, and the development and enrichment of Jewish life. Sharon has contributed several major gifts to the AADC through The Karma Foundation and has been a lead donor to the three major capital campaigns run by the AADC. She chaired the “Douglass…Always a Leader” Capital Campaign,” which successfully raised $29 million. In the AADC’s “The Campaign for Douglass” in 2010-2015, she provided major support for the new Douglass Global Village Living-Learning Center Residence. A former AADC Board member and active leader and volunteer on key committees, Sharon consistently contributes to the AADC Annual Appeal. In her current role as a member of the Honorary Committee for the AADC 100th Anniversary, Sharon lends her wise council and generosity toward strengthening the AADC for a new century.

Sharon and her family, led by her daughter, Dina, recently worked with Rutgers University to establish and staff the Rutgers Center for Adult Autism Services (RCAAS). The RCAAS offers adults with Autism Spectrum Disorders (ADS) a one-of-a-kind support program that makes an independent and fulfilling life possible. Simultaneously, it advances research and ensures that each year, a cadre of graduates leaves Rutgers prepared to enter careers in support of this underserved population. Located on the Douglass Campus, the RCAAS is a center within the Graduate School of Applied and Professional Psychology.

In addition, Sharon also established The Promise Scholarship and provides support to the Lucy Scarcella Special Opportunity Fund. She has contributed to the Bildner Center for the Study of Jewish Life and the Mason Gross School of the Arts at Rutgers.

Sharon has chaired several important committees at the AADC and served her Class of 1967 as Alumnae Council Representative and as a member of the Reunion Committee. Alumnae have enjoyed her hospitality at gatherings at her homes in Florida and New Jersey.

At Rutgers University, Sharon served as a member of the Rutgers University Foundation Board of Directors and on the Rutgers President’s Council Executive Council. She has served on the boards of many organizations, some of which include the George Street Playhouse, the Actor’s Fund, Yiddish Book Center, Association for Israel’s Decorative Artists, and the Creative Glass Center of America at Wheaton Arts.

Sharon is a recipient of many honors, including the AADC Alumnae Recognition Award, the AADC Medal, and she was inducted into the AADC Society of Excellence in 2015. She received a 2014 New Jersey Women of Achievement Award presented by the New Jersey State Federation of Women’s Clubs of GFWC and Douglass. Rutgers presented her with the Meritorious Service Award and inducted her into the Rutgers Hall of Distinguished Alumni in 2015. Outside of the University, the George Street Playhouse awarded her its Thomas H. Kean Arts Advocacy Award.

Sharon Karmazin ’67 continues to be an AADC leader and a role model for our alumnae community. We salute her for her many achievements, her generosity, her spirit and her leadership.