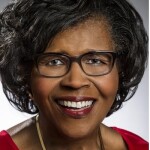 It is hard to find anyone with deeper roots to the Associate Alumnae of Douglass College, to Douglass College itself and to Rutgers than M. Wilma Harris ’66. Each association involved a position of great responsibility and leadership, and she performed them with intelligence, commitment and wisdom. Wilma has provided leadership, vision and support to the AADC, her class and our alumnae community through her generosity and dedication over more than five decades. She served as a member of the Executive Committee and the Board of the AADC for 15 years, as well as co-president of the Class of 1966.

As a member of the AADC Mediation and Negotiation Team that worked on the July 2016 Agreement with the Rutgers Parties, Wilma devoted countless hours to help determine the best course of action on the issues the team considered on behalf of the AADC. Wilma served as a key member of the team, sharing her expertise from her a career in corporate human resources at Prudential and as an alumnae leader. In recognition of her work on this critical initiative, Wilma was awarded the AADC Medal in 2017.

Wilma is a founding member of the AADC Black Alumnae Network. Her organizational skills and talent for fostering collaboration have assisted many AADC committees, including Administration, Program, Executive Director Search Committee, Nominating and Strategic Planning. She received the Alumnae Recognition Award in 1982, she was inducted into the Douglass Society (now called the AADC Society of Excellence) in 1996 and was honored with the AADC’s Margaret T. Corwin Award in 2003, the highest recognition for service. In 1997, Wilma was named a recipient of the Women of Achievement Award by the New Jersey State Federation of Women’s Clubs of GFWC and Douglass College.

Prior to a 36-year career culminating as a senior executive with Prudential, Wilma was on the staff of Douglass College for eight years as Counselor-in Residence, Assistant Dean of Students and Associate Dean of Students. While in these positions, Wilma was always a positive role model for students and epitomized what it meant to be a “Douglass Woman.” She was an especially powerful resource and advocate for Black students, helping many to navigate the unchartered waters of a predominately white institution.

At Rutgers University, Wilma serves as Charter Trustee on the Board of Trustees. She was inducted into the Rutgers African-American Alumni Alliance Hall of Fame and she has received the Rutgers Alumni Meritorious Service Award. She was also named a Loyal Daughter by the Rutgers Alumni Association (RAA).

In New Jersey, Wilma was a charter member of the Student Assistance Board, which shaped the policies for state financial aid programs, merit-based and need-based. A vocal proponent of educational opportunity, she forged the way that has assisted over two million students with Tuition Aid Grants during her 32-year tenure on the Board. She served as vice chair or chair of the Boards for 24 of those 32 years, as well as the chief volunteer for student financial aid. In recognition of her commitment and action in advancing higher education opportunities and accessibility, Wilma was granted an Honorary Doctorate from St. Peter’s College.

Wilma’s experience began as a Douglass student, when she served as class president and vice president of the Government Association, for which she received the Senior Service Award. During her senior year, Wilma was appointed to serve on the University’s Bicentennial Committee and as the Douglass student representative to the Bishop-Lynton task force; the outcome of that task force was the creation of Livingston College in 1969.

M. Wilma Harris ’66 is an outstanding example of service and commitment. Her loyalty, generosity and dedicated service have been an inspiration to all of us.