As the AADC celebrates 100 years, our “Legacy of Leaders” series highlights just some of the many people whose dedicated work has been indispensable in getting the AADC to this magnificent milestone. They all have established an enormous legacy of leadership that will ensure the future of our sisterhood. Let’s celebrate them! 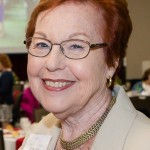 Since her graduation from Douglass more than 60 years ago, Carol Hansmann Hamlin ’61 has shown a steadfast commitment to the AADC, her class and our alumnae sisterhood. She has demonstrated unwavering loyalty, generosity, dedication and selfless service in helping the AADC fulfill its mission. Carol has made an impact both as a tireless volunteer and as a key former member of the AADC staff.

Carol began her involvement with the AADC as a member of the former Middlesex County Club and she served on the then Clubs Advisory Committee. After volunteering on the Reunion Committee, she soon progressed to various leadership roles, including serving on the AADC Board of Directors in 1971 as Vice President of Programs, followed by a term as President. Carol has also served as Vice President of the Department of Administration and on the Administration Committee. She also shared her deep knowledge of our organization and her extensive fundraising experience as the Vice President of Development on the Executive Committee of the AADC Board of Directors.

Carol is a longstanding member and dedicated supporter of the AADC. She advocated for the creation of the AADC Memorabilia Committee to keep our timeless treasures and artifacts organized and preserved for generations of alumnae to enjoy. Together with the committee, she has been instrumental in creating a timeline of key events in our history as well as assembling a time capsule about the AADC in honor of the AADC Proud History to Bright Future 100th Anniversary celebrations.

Carol also has served on the AADC Society of Excellence Selection and Major Gifts committees. She regularly attends AADC events such as Reunion Weekend, Evening to Honor AADC Benefactors, the Zagoren and L’Hommedieu Lectures and the AADC Society of Excellence Induction Ceremony. She has continued to connect and participate in our virtual programs and events offered over the last two years.

The AADC has presented several of its most prestigious awards to Carol Hamlin. She was named recipient of the Margaret T. Corwin Award, the highest award for service, in 1984. In 2019 she received the Vanguard Service Award in recognition of her dedication and efforts on behalf of the AADC for more than 50 years.

Following a career in development with the American Cancer Society, Carol became the AADC Director of Major Gifts on a part-time basis for 14 years, until her retirement in 2016. During her staff tenure as the Director of Major Gifts, she played an instrumental role in the AADC’s fundraising efforts, including two capital campaigns. The “Douglass: Always a Leader” campaign exceeded its $25 million goal by raising $29.1 million. The 2010-2015 “Campaign for Douglass” did even better, surpassing its goal by raising $41.8 million. Carol not only worked on that campaign, but she was also a major donor.

Carol also is a consistent donor to the AADC Annual Appeal. She is a member of the Mabel Smith Douglass Leadership Circle, the Ivy Society and the donor of the endowed Hansmann Hamlin Scholarship. She was a major contributor to the Kathleen W. Ludwig Global Village Living Learning Center. Together with her husband, the Honorable C. Judson Hamlin, she served as a silver sponsor for the AADC 95th Anniversary Gala. Carol is a frequent contributor to both large and small special projects and has made many heartwarming tribute and memorial contributions.

People like Carol are the heart and soul of the AADC. Her generosity and example inspire our sisterhood and will help ensure the strength of AADC initiatives and programs for generations to come.