As we count down to our AADC 100th Anniversary, officially on June 10, 2022, we recognize the contributions of so many people to the growth and success of our organization and its ability to connect alumnae. Our “Legacy of Leaders” series highlights just some of the many people whose dedicated work has been indispensable in getting the AADC to this magnificent milestone 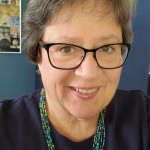 When it comes to focused leadership, extraordinary vision, communications expertise and unwavering commitment, Tina B. Gordon ’72 is the Associate Alumnae of Douglass College role model. For more than 30 years, one would be hard pressed to think of any AADC event, program, communication, milestone or challenge that hasn’t had Tina’s involvement. She shares her talents tirelessly, for which the AADC is forever grateful.

Tina’s volunteer hours as a thoughtful and engaged member on AADC committees, the Board of Directors, and as an active member of her class, are a full-time passion. Since 2004, Tina has served with distinction on the Board of Directors, as Vice President for Marketing and Communications for four terms, as an outstanding President for two terms, and as Treasurer. She is currently serving her second stint as Secretary. Tina has shared insights as part of the Strategic Planning Committee, chaired The Douglass Society Selection Committee, and contributed her expertise on the Marketing and Communications Committee. She also proudly represented her class as both President and Alumnae Council Representative. Tina was an active participant in the “Save Douglass College” campaign, advocating on every front for the AADC and Douglass College.

Tina can be found at most alumnae events and programs, always with a smile, and an eye out for helping sister alumnae make connections. She is engaging and outgoing in person, on Zoom, and at the podium, and her warmth and wit uplift all those she encounters. Tina served as master of ceremonies of the AADC 95th Anniversary Gala in 2017 and will reprise that role at the “Proud History, Bright Future Gala” marking the AADC’s 100th Anniversary on June 11, 2022.

During the height of the pandemic, Tina created new initiatives to keep alumnae engaged. The “Sharing Our Stories” series provided a platform for alumnae to discuss how their lives and careers had changed because of the pandemic and how they had adjusted. As part of the 100th Anniversary, she created the “Legacy of Leaders” series, a look at some of our most devoted leaders, their commitment to the AADC and to their careers and communities. She also initiated several Zoom sessions called “Tea with Tina,” where alumnae could gather safely online with a fancy hat, a beverage of their choice and a chance to stay engaged and connected in an informal gathering.

Tina is a generous supporter of the AADC Annual Appeal and has challenged alumnae and friends to follow her lead by personally matching donations on numerous occasions. She has also shared her philanthropy as a major donor. Tina engaged Johnson & Johnson in her AADC passion as well, restoring gift matching for the AADC for Johnson & Johnson employees and retirees, arranging for the donation of a large monitor for the AADC Conference room, as well as funding for video equipment used for the Douglass Alumnae Oral History Project.

For her sustained loyalty and service, Tina received the 2008 Alumnae Recognition Award and the 2015 Margaret T. Corwin Award, the highest award for service. In 2019 she was honored with a “Women of Achievement” award by the New Jersey State Federation of Women’s Clubs of GFWC and Douglass Residential College. In October, 2021, Tina was inducted into the AADC Society of Excellence in recognition of her career accomplishments and service to the AADC.

Outside of the AADC, Tina spent 30 years as a Board member of the Community Visiting Nurse Association of Somerset and Middlesex Counties, including two terms as president. She is a dedicated Rutgers women’s basketball fan and created and runs the Facebook page and website of the Cagers Club, the official fan club of Rutgers Women’s basketball.

The AADC is blessed to call Tina Gordon an alumna, a sister and a devoted friend.