As the AADC counts down to our exciting 100th Anniversary in June, 2022, our “Legacy of Leaders” series highlights and celebrates just some of the many people whose dedicated work and leadership will ensure the future of our sisterhood. 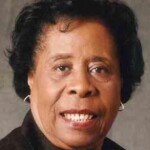 Evelyn Sermons Field ’49 was an accomplished educator, a dedicated alumna and an outstanding community leader. Her commitment to her class and to the Associate Alumnae of Douglass College, to Douglass and to Rutgers University has been recognized with numerous awards and honors she received from the AADC and other organizations.

For six decades, Evelyn participated on numerous AADC committees, including the Douglass Fund, Major Gifts, Long Range Planning and Convocation. She served on the AADC Board as Acting President, Vice President for Administration, Secretary, and as Alumnae Trustee. In addition, Evelyn was instrumental in creating the AADC’s Black Alumnae Network. She was inducted into the prestigious Douglass Society (now the AADC Society of Excellence) and was awarded the AADC Alumnae Recognition and Margaret T. Corwin Awards, as well as the Vanguard Service Award in 2009 for serving her class and the AADC for more than 50 years. The New Jersey State Federation of Women’s Clubs named her one of their “Women of Achievement,” and Rutgers University Alumni Federation presented her with its Meritorious Service Award.

As a student, Evelyn was one of the first two African-American women to live in the dormitories on campus at Douglass College and be recognized with the first N.J.C. Heritage Award. She earned her bachelor’s degree from The New Jersey College for Women, now Douglass, and master’s degrees in education and in library science from Rutgers University.

Evelyn was from nearby Somerville, NJ, where she became a teacher and an education media specialist in the public school system. A community activist, she was a member of the Somerville Negro Civic Council, the League of Women Voters, the American Association of University Women and the Rolling Hills Girl Scout Council, which presented her its Five Worlds of Girl Scouting Women of Achievement Award.

She also represented the National Council of Negro Women on the Board of Directors of the New Jersey Black Issues Convention. She held leadership positions with the local Raritan Valley Section, where she initiated educational, cultural enrichment, youth recognition and career development programs for young people. At the national level, she served on the National Nominating Committee, the Strategic Planning Committee and chaired the National Recertification Committee.

Evelyn Sermons Field passed away in December, 2015. She continues to hold a special place in the history of the AADC for her leadership, selfless dedication and professional achievements.