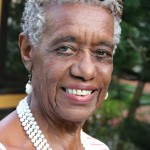 Inez Phillips Durham ’57, Psy.D., LCSW, distinguished herself in a lifelong career as an educator, psychologist and community advocate. Throughout her career in public education, she was guided by a strong belief that school is second only to the family as an important factor in a child’s life. Inez’s advocacy in the communities where she has lived and worked has been further bolstered by a long-held personal commitment to serve and improve the lives of others.

Inez is a familiar face to Douglass alumnae, attending numerous AADC events and staying connected to her many alumnae friends and her classmates. She began serving as a class officer following graduation and held that position for many years. She was actively involved in the planning of the 50th Reunion for the Class of 1957, serving as class president. She was elected to the AADC Board of Directors, where she was instrumental in establishing the Black Alumnae Network (BAN), which marked its 40th anniversary last year. Inez has shared her expertise, including as a leader at BAN’s 2018 Jewel Plummer Cobb Sisters Conference, “Having the Conversation: Sexual Violence and the Black Woman.” She was able to draw on her network to secure a featured speaker.

As an undergraduate at Douglass College, Inez wanted to gain equal resources for African American women. She developed an early commitment to bringing about change and was drawn to social work partly because of challenges in racism. Inez earned a degree in psychology from Douglass College and went on to earn a Master of Social Work degree from Rutgers Graduate School of Social Work in 1961 and a Doctor of Psychology degree at the Rutgers Graduate School of Applied and Professional Psychology in 1983. She was initiated into Phi Delta Kappa, Rutgers University Chapter. She did post graduate work at New York University.

Inez’s dynamic approach as an administrator led to the establishment of cutting-edge programs during her career in student services. She served as the director of pupil services in Metuchen for more than 20 years, and then as assistant superintendent for pupil services for Piscataway Township Public Schools. Some of her accomplishments include starting a school for students with behavioral issues, instituting learning consultants, and creating programs for children with autism.

Inez’s work as a staff psychologist at John F. Kennedy Medical Center enabled her to serve families in the Middlesex County community. She is one of four co-authors of Role of an Ethnic Minority Alumni Advisory Committee in Training Professional Psychologists. As a community advocate, Inez served the citizens and children of Plainfield, NJ, where she lives, in elected positions on the Plainfield Board of Education as president, vice president and chair of numerous committees. She was a key contributor to many advances in the districts she served and later participated in a township study team on educational issues. For many years, Inez was a member of the Distribution Committee of The Plainfield Foundation. Presently she serves as treasurer on the Board of Trustees of Plainfield Public Library.

Inez is the recipient of numerous awards, recognitions and proclamations for services to her communities. Among them, she received the Volunteer Recognition Award from the Union County Board of Chosen Freeholders and the Award of Recognition in Community Service from United Plainfield Community Development Corporation. In February 2022, she was honored as the recipient of the Chester Holmes Humanitarian award.

Inez is devoted and generous to causes she believes in. She has planned an estate gift to support students who major in psychology and who demonstrate interest in the psychological welfare of people of African descent, with preference given to present or past residents of the African Cultural Experience House in the Global Village at Douglass Residential College. At the AADC, she is a consistent donor to the AADC Annual Appeal to help advance our mission.

Future generations of alumnae and citizens will continue to benefit from the work of Inez Phillips Durham ‘57, an exemplary woman and leader.