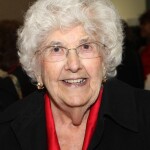 As a graduate of New Jersey College for Women with a B.S. degree in chemistry, Regina Best Heldrich ’42 felt strongly about women being prepared for careers in the sciences. She recalled how reading the biography of Marie Curie sparked her interest in science, which eventually led to her majoring in chemistry at NJC and resulted in a rewarding career both in chemical laboratories and in corporate administration.

Her desire to encourage women to become scientists culminated in the creation of The Regina Best Heldrich Science Endowment for Douglass and the Regina Best Heldrich Scholars Endowment for Chemistry Majors. The former provides funding for the most pressing needs of the Douglass Project for Women in Math, Science, and Engineering each year. It has supported Douglass students with science research grants and in the programs offered through Project SUPER (Science for Undergraduates: A Program for Excellence in Research).

Regina also provided funding of a major renovation of the 80-year-old Douglass Chemistry Building in which she spent many hours as a student. It was turned into state-of–the art laboratories facility for young women starting chemistry studies. That building today bears her name.

An active and engaged member of the AADC, Regina served her class with distinction as Vice President and was a leader in planning her class’ 50th reunion. She also assisted the AADC as a member of the Class Advisory Committee. She and her late husband John, a Johnson & Johnson executive with deep ties to the revitalization of New Brunswick and to Rutgers University, never hesitated to support the AADC with generous contributions and vocal advocacy. The Associate Alumnae of Douglass College considered Regina a thoughtful advisor and valued her support and wisdom during the “Save Douglass College” campaign. Her participation in planning meetings and attendance at rallying events made an important statement and helped positively change the course of events for Douglass.

In 2007 the AADC awarded Regina Best Heldrich the Douglass Medal (now called the AADC Medal) for her many important contributions. She was also honored in 2002 by the Zimmerli Museum of Rutgers University for her lifelong dedication to preserving the arts and culture. Her work for social and civic issues also included the American Field Service and the presidency of the Highland Park Women’s Club in 1966-1968 and 1976-1978.

Regina was a truly outstanding community leader, serving as president of the PTAs of the elementary, middle and high schools in Highland Park, NJ. She was president of Meals on Wheels of Greater New Brunswick for five years after working many years as a delivery service volunteer. She also served for seven years on the Board of the Visiting Nurses Association.

Regina Best Heldrich, who passed away in 2014, provided leadership and vision to the AADC through her generosity and as a dedicated member of the Class of 1942. Her contributions and her impact continue to benefit the students and alumnae of Douglass.