As we count down to our exciting 100th Anniversary in June, 2022, we recognize the contributions of so many people to the growth and success of our organization and its ability to connect alumnae. Our new “Legacy of Leaders” series highlights just some of the many people whose dedicated work has been indispensable in getting the AADC to the precipice of this magnificent milestone. They all have established an enormous legacy of leadership that will ensure the future of our sisterhood. Let’s celebrate them! 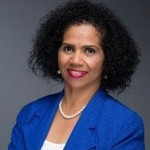 When Valerie L. Anderson ’81, MBA, became Executive Director of the AADC in March 2011, she continued a long tradition of exceptional alumnae who have served in that capacity, harkening back to the iconic Adelaide Marcus Zagoren ’40. Valerie brought to the AADC her considerable professional experience, primarily from a long career with FedEx, along with great business acumen and knowledge of philanthropy through her tenure at the March of Dimes.

Valerie is a visionary who works well with all AADC constituencies and who has established partnerships within the Rutgers community. She represents the AADC with strong values and tradition, always promoting our organization’s achievements and commanding a level of respect becoming for a beloved community like the AADC.

She is committed to the AADC mission as an independent, self-supporting 501(c)(3) organization that develops and promotes connections among Douglass alumnae by providing programs, services, networks and lifelong learning opportunities that represent the interests and needs of our diverse alumnae. She has a genuine affinity with people of all backgrounds and ages, and she is as comfortable with our most senior alumnae as she is with the newest young women in our community, for whom she often serves as a role model and mentor.

Valerie’s leadership qualities were evident as far back as her time as a student at Plainfield High School, where she was active in student government. At Douglass as a first-generation college student, she was an active leader who served two terms as the President of the Douglass Black Student Congress. She graduated from Douglass College in 1981 with a B.A. in Psychology and a certificate in Criminal Justice.

Valerie’s professional career began with FedEx Corporation. Valerie progressed through positions of increasing responsibility during her 21 years of service, managing the operations of distribution and service centers supporting worldwide commerce, managing multi-million-dollar budgets and large workforces. While at FedEx, she led and represented the company in numerous community and philanthropic outreach efforts. Her work there was recognized with awards from the March of Dimes, Make-A-Wish Foundation, Special Olympics and the United Way.

While at FedEx, Valerie returned to school and received her Master of Business Administration (MBA). She transitioned into the non-profit sector as the State Director of Field Services for the March of Dimes, where she oversaw the operations of three Regional Chapters in New Jersey. Valerie joined the AADC as the first African American Executive Director in 2011. Her visionary skills have been invaluable in defining business objectives and developing and executing strategic planning. She was instrumental in guiding the AADC, along with staff and key alumnae leaders, to achieve the organization’s greatest fundraising results to date, in the Campaign for Douglass, “Innovative Education, Women’s Leadership,” which surpassed its initial goal and concluded with more than $41 million raised. Valerie is at the helm as we celebrate our 100th anniversary and begin our next century of success.

Valerie has made her mark on the AADC in numerous ways. She was instrumental in the renaming of the AADC Black Alumnae Network’s Jewel Plummer Cobb Sisters Conference, which honors the legacy of the late Dr. Cobb as the first African-American Dean of Douglass. She also helped launch the timely and impactful AADC Excellence in Inclusion and Equity Initiative that began nearly three years ago. With this important initiative, seeded through the generosity of an alumna, the AADC has prompted discussions on how we can advance equity and inclusion in the context of uncomfortable realities and build on our intrinsic trust. She has helped bring renowned authors to speak at AADC lectures, including Rebecca Skloot, author of “The Immortal Life of Henrietta Lacks,” and Piper Kerman, author of “Orange Is the New Black.” Those lectures were opened to the entire Rutgers community and attracted some of our largest audiences. She has led our organization through challenging times, including the unprecedented Covid-19 pandemic.

Valerie is an inspiring and dynamic leader who is goal-oriented and results-driven. She has been honored frequently for her professional and civic accomplishments. In 2017, she received the AADC Medal for her work as a key member of the negotiating team that worked on the July 2016 Agreement with Rutgers Parties. She received the 2018 Sojourner Truth Phenomenal Woman Award from Rutgers Student Affairs. The New Jersey State Federation of Women’s Clubs and Douglass Residential College presented her with the New Jersey Women of Achievement Award in 2018, and that same year she was inducted into the Rutgers African American Alliance, Inc., Hall of Fame.

It is no surprise that, given her immense pride in the AADC as a self-supporting organization, Valerie leads by example as a loyal and generous donor. She is a consistent contributor to the AADC Annual Appeal and a member of the Mabel Smith Douglass Leadership Circle. Her generosity, leadership and service will help ensure the strength of AADC initiatives and programs for generations to come.

Despite her demanding position, Valerie finds time to lead a grief support group, the “Beauty for Ashes.” She is also a dedicated member of Faith Christian Outreach Center Church in her native Plainfield, where she serves as a Deacon and ministry leader of the Pastoral Care Ministry. Valerie is also a member of the Alpha Kappa Alpha Sorority, Incorporated, and the Association for Fundraising Professionals.

In the past decade, Valerie has become an invaluable part of the sisterhood that is the AADC, which has benefited greatly from her dedication, vision and outstanding leadership. She has written a new chapter in our legacy of leaders.