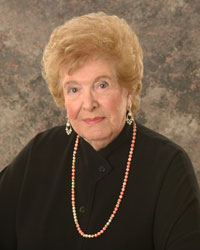 The name Adelaide Marcus Zagoren ‘40 is synonymous with the Associate Alumnae of Douglass College.

Her visionary leadership as Executive Director of the AADC for 26 years shaped the organization into what it is today. During her tenure at the helm, from 1968 to 1994, she increased fundraising and established traditions such as The Douglass Society (now called the AADC Society of Excellence), into which she was inducted in 1987. She also established the AADC Extern Program, matching Douglass students with Douglass alumnae to provide the students with a one- or two-week work experience to “try on” a career. Today’s AADC Douglass Alumnae Mentoring, which focuses on alumnae mentoring alumnae, is an outgrowth of that creation.

Adelaide encouraged the establishment of the AADC Black Alumnae Network (BAN), which led to the formation of future affinity groups and regional networks. She also created the Alumnae Travel Program, which today continues providing memorable experiences and bringing alumnae together in far-flung locations around the world.

With her service as her Class Secretary and Class President, Adelaide helped classmates stay connected to each other and to the AADC. She also was the Honorary Chair of the highly successful fundraiser, the “Campaign for Douglass,” in 2010, which ultimately raised $42 million, exceeding its goal of $35 million. She particularly enjoyed attending the annual Zagoren Lecture, named in her honor, that each year brings distinguished alumnae speakers to address our alumnae community.

Adelaide served as trustee and president of the Blanche & Irving Laurie Foundation, a philanthropic organization with a focus on support for Jewish social services; secondary schools; cultural organizations; the arts, particularly for theater; as well as for medical and health centers. She breathed new life and programs into each position and received many honors for her work.

The Laurie Foundation generously established two endowments in Adelaide’s memory: The Adelaide Marcus Zagoren ’40 Science Scholarship and The Adelaide Marcus Zagoren ’40 Science Fellowship. These funds create a legacy of support to Douglass women in perpetuity, as does the culture of professionalism, sound business structure and the insistence on excellence she instilled at the AADC.

Adelaide said, “I knew the moment I stepped onto the Douglass Campus, I would never want to leave.” She never left us, even now. Long after her passing in 2014, Adelaide remains an inspiration to the AADC. Her leadership, friendship and generosity during more than seven decades continue to enhance our organization and serve all alumnae.