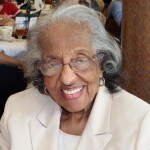 Emma Andrews Warren ’49 has enriched our organization’s heritage by sharing her own legacy and experience with our alumnae community. She became a trailblazer and a pioneer as she made history early on as one of the first African-American undergraduates to live on campus at what was then the New Jersey College for Women (NJC). Today, Emma is believed to be the oldest known living African-American Douglass alumna.

Over the years, she has stayed engaged with the AADC. Currently, Emma is a member of the AADC 100th Anniversary Honorary Committee. She has returned to campus to share her memories, attend events and to celebrate reunion. She has inspired a new generation of alumnae. In observance of Women’s History Month in March 2018, Emma was the guest speaker at an AADC Black Alumnae Network gathering, accompanied by her daughter Lorraine Warren ’86. She recalled her undergraduate years with gratitude and acknowledged a sense of “working harder” and staying the course for the times as one of the first African-American undergraduates to live on Douglass Campus. Emma forged a new path. She also noted her classmate and campus roommate, another trailblazer, the late Evelyn Sermons Field ’49, with whom she felt connected and whose success she admired. Emma says she also followed in the footsteps of her late sister, Constance Andrews Lambert ‘45.

Emma came back to celebrate her 70th reunion at AADC Alumnae Reunion Weekend 2019 along with two of her classmates. She relished the memories and created new ones at the Vanguard Reunion Luncheon and again the next day as she joined in the celebration with other Milestone Reunion Classes as they processed down the center of Voorhees Chapel. She was greeted with awe and admiration by decades of alumnae who felt privileged to meet her.

The AADC salutes Emma and the many women of color who have made an impact on our Douglass alumnae sisterhood. “As an African-American alumna, it has been an honor to meet someone who overcame a lot of obstacles. Emma paved the way and serves as a role model for all alumnae, especially for African-American alumnae,” says AADC Executive Director Valerie Anderson ’81.