As the AADC celebrates 100 years and forges our bright future, our Legacy of Leaders series highlights just some of our many dedicated volunteers. They have established an enormous legacy of leadership that will ensure our success. Let’s celebrate them! 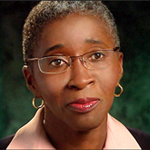 It is impossible to count the number of lives touched by the work of Dr. Shireen K. Lewis ’86. Shireen K. Lewis is Executive Director of EduSeed, a nonprofit organization in Washington, D.C., and Founder of EduSeed’s SisterMentors program. Many in our alumnae community may know her because of her work and also because of her involvement as a leader of the AADC Washington, D.C., Regional Connection Group.

SisterMentors, which is celebrating its 25th anniversary this fall, promotes education among women and girls of color, including African American, Latina, Asian American, Native American, Muslim and women and girls who are immigrants, refugees and asylees. The program mentors girls of color from low income families helping prepare them for college and helps women of color to earn their doctorates. The women doctoral students are the mentors and role models for the girls. Girls start in SisterMentors in elementary and middle school and are part of the program until college graduation and beyond. The program has helped over 100 women of color to earn higher education degrees including Ph.Ds in math, science and economics, fields where women of color are underrepresented. SisterMentors goal is to help women and girls of color to live in freedom and dignity and to pass this on to the next generation.

Dr. Lewis was recently featured in an online interview in Ms. Magazine. In the article titled, “With SisterMentors, Dr. Shireen Lewis Is Building a Fierce Future for Women and Girls of Color in Education,” she shares the origin story about SisterMentors, how the program has evolved since its founding and its many accomplishments.

Dr. Lewis has devoted more than 20 years to mentoring and coaching women and girls. In 1989, she received an award from the National Association of Women Lawyers for her work on behalf of women law students. She has mentored women in college by encouraging them to pursue graduate and professional school.

Dr. Lewis was a teacher and Dean of a high school for girls in Trinidad and Tobago, where she was born and raised. She has helped raise funds for a teenage pregnancy program at a high school in her hometown of Fyzabad, Trinidad, and for the first school in a village in Tibet that has the unprecedented requirement that 50 percent of its students must be girls. She has served on the board of several community organizations that promote education and equity for women and girls. She is past Co-president of the Washington, D.C., branch of the American Association of University Women.

Her scholarship and university teaching are in Francophone West African and Caribbean literature and theory. Her book, entitled “Race, Culture and Identity,” includes a repositioning of black Francophone women as intellectual contributors to the birth of Négritude, a historic literary movement, Dr. Lewis has taught at several universities and has presented her scholarship widely.

At Douglass, Shireen received a bachelor’s degree in French and Spanish and was inducted into the Phi Beta Kappa Honor Society in her junior year. She went on to earn her J.D. from the University of Virginia School of Law and her Ph.D. in French Literature from Duke University. She is fluent in French and Spanish, has lived in several countries including Senegal and France and has traveled extensively, including to Tibet and China. She was an attorney with a New York City law firm and is admitted to practice law in the State of New York and the District of Columbia. She is a member of the State of New York and District of Columbia Bar Associations.

Dr. Lewis has been featured on television, including Verizon FiOS, Comcast Newsmakers, MHz Networks and DCTV and in various magazines, including Essence, Ebony, Ms. and DIVAS, published in Paris, France. Her work with SisterMentors is documented in Allison Silberberg’s book, “Visionaries in Our Midst: Ordinary People Who Are Changing Our World” (University Press of America, 2009).

Dr. Lewis has received many awards for her work, including honorary degrees from Rutgers University and Hollins University, a Women Making a Powerful Difference Award from Ebony magazine and Pine Sol, and the Honorable Annice M. Wagner Pioneer Award from the Bar Association of the District of Columbia.

In May 2005, Dr. Lewis was inducted into the AADC’s Douglass Society, now called the AADC Society of Excellence. She is a consistent donor to the Annual Appeal and has returned to campus for many AADC events and programs. She also serves as a leader of the AADC Washington, D.C., Regional Connection Group, where she has welcomed alumnae to various gatherings and museum outings in the area.

We salute Shireen Lewis ’86 for her dedicated efforts to improve the lives of women and girls through her mentorship, activism and scholarship.