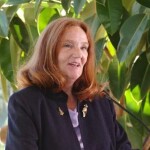 An outspoken activist as a student, Sheila Kelly Hampton ‘70 continues to have her voice heard even after 50+ years of working with the AADC since her graduation from Douglass.

During her two terms as AADC President (2004-2008), Sheila led the charge – along with then-AADC Executive Director Rachel Ingber ’83 and then-Dean Carmen Twillie Ambar – to “Save Douglass College” when the planned “Transformation of Undergraduate Education” at Rutgers University proposed to eliminate Douglass College.

Sheila crafted messages, secured resources, rallied alumnae and garnered support and publicity. Her political savvy was instrumental in keeping legislators informed and involved. With tenacity and enthusiasm, she helped ensure that the “Save Douglass College” message was heard and understood by key decision makers. The result was the formation of Douglass Residential College, saving the institution from the fate that saw the dissolution of Livingston College, Cook College and Rutgers College. She, Ingber and Dean Ambar were awarded the AADC Medal for their stellar work.

Sheila has received numerous honors for her work on behalf of the AADC. Her 50 years of dedicated, selfless service was recognized in 2021, when she was presented the AADC’s Vanguard Award. She is also the recipient of the Margaret T. Corwin Award, the highest award presented by the AADC for service. In addition to her two terms as AADC President, Sheila served on the AADC Board and Executive Committee for many years and held numerous leadership positions. She also has been a leader in the Class of 1970.

She has supported the AADC not only financially but also with her time, talents and wisdom. Sheila has demonstrated an ongoing commitment through her extensive participation on AADC committees and attendance at events and programs since her graduation. She has also been a strong advocate and devoted countless volunteer hours to the AADC. When the AADC itself was threatened with dissolution in 2015, Sheila was again an outspoken advocate of our organization in the “SAVE AADC” movement.

Sheila is a consistent supporter of the AADC Annual Appeal at the Mabel Smith Douglass Leadership Circle level and has participated in every major fundraising campaign. Her generosity will help ensure the strength of AADC initiatives and programs for generations to come. In recognition of her leadership, the Sheila Kelly Hampton Prize for Douglass (student) Leadership was created in 2009.

Sheila has risen to every challenge and provided a shining example to all alumnae of how to make a lasting impact. Her devotion has set a high bar for alumnae to emulate.