As the AADC celebrates 100 years and forges our bright future, our Legacy of Leaders series highlights just some of our many dedicated volunteers. They have established an enormous legacy of leadership that will ensure the future of our sisterhood. Let’s celebrate them! 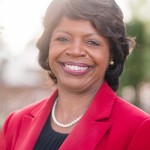 The AADC proudly welcomed the Honorable Cheri Beasley, Class of 1988, as its keynote speaker at the AADC Proud History, Bright Future 100th Anniversary Gala in June. She shared her inspiring journey of becoming the first African-American woman to serve as Chief Justice of the North Carolina Supreme Court to currently running for the 2022 U.S. Senate at a time when there are no African-American women in the Senate. She also praised the AADC for providing our alumnae community with important networking opportunities to further women.

Raised by a trailblazing mom, Cheri learned the values of faith, family, and fairness from a young age. She and her husband Curt instilled those same values in their twin sons, Thomas and Matthew, as they raised their family in North Carolina.

Cheri’s commitment to service has guided her work, first as a public defender, then as judge and then as the first African-American woman to serve as Chief Justice of the North Carolina Supreme Court in 2019. Throughout her time serving North Carolina, she always acted with independence to keep communities safe, uphold the rule of law, and protect our constitutional rights.

Justice Beasley’s commitment to serve North Carolina has extended far beyond her judicial career, as she has tirelessly mentored students, new attorneys, and judges. Her passion for upholding the Constitution is evident to those who have heard her lectures at the New District Court Judges’ School at the UNC-Chapel Hill School of Government, the National Institute for Trial Advocacy, and Appellate Advocacy and Trial Advocacy classes at the University of North Carolina School of Law and North Carolina Central University School of Law. She is a member of the American Bar Association, Appellate Judicial Division, North Carolina Bar Association, and a host of other professional and civic organizations. She often engages with students, inviting them to observe the court system and discuss their observations.

Cheri has been a long-time supporter of the AADC and shares her time, talents and treasures with our alumnae community. Cheri is active with the AADC Wilmington, North Carolina, Regional Connection Group and has welcomed members to her home for a gathering. She was inducted into the AADC Society of Excellence in 2015. In 2018, she returned to campus to celebrate her 30th Reunion with classmates at AADC Alumnae Reunion Weekend, where she was a panelist for the Women Changing the World discussion, and she also attended the AADC Forward Together Better Together 95th Anniversary Gala during Reunion.

She graduated from Douglass with a double major in Economics and Political Science and concentrations in Accounting and Finance. She also studied flute at Mason Gross School of the Arts and was active in student life serving as president of Nicholas Residence Hall and as house chairwoman. Cheri was active in PLEN (Public Leadership Education Network), with placement in two externships at the U.S. State Department and with the National Association of Women State Legislators. In 2013, Cheri was a Hall of Fame Inductee by the Rutgers University African-American Alumni Alliance, Inc. In 2019, she was named to the Rutgers University Hall of Distinguished Alumni.

The AADC is fortunate to have a respected and active leader like Cheri within our dedicated community.