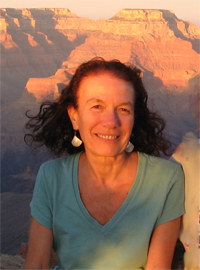 Carol Castellano, Class of 1973, and author and advocate for the blind, is the Director of Programs for the National Organization of Parents of Blind Children and is an author, advocate, and president emerita of Parents of Blind Children-NJ, an organization she co-founded. As a tireless advocate, she has been integral to state and national efforts to eliminate discrimination and prejudice against the blind and to help achieve security, equality, and opportunity for blind people. Carol writes frequently on the education and development of blind children. Her articles and books explore helping blind children progress from early literacy experiences to full participation in the classroom, as well as teaching children the skills needed for an independent life.

Born and raised in New Jersey, Carol graduated from Douglass College with high honors in English literature. Her early career in publishing in New York City led to teaching in a Manhattan private school before her first child was born, a daughter named Serena. Arriving four months early and weighing less than a pound and a half, Serena spent nearly eight months in the neonatal intensive care unit. When Carol and her husband, Bill Cucco R ’75, brought their newborn home, she was blind and far behind in her development. It was during this time that the new parents were introduced to the National Federation of the Blind and the National Organization of Parents of Blind Children. Carol felt an immediate affinity to the organizations because they advocated the idea that blind children have a right to a full and satisfying life.

Serena’s premature birth proved to be a turning point in Carol’s career. She began researching and writing articles on the prevention of premature birth and was invited to join a select group of parents, physicians, and ethicists to discuss the difficult issues of decision-making in neonatal intensive care. The proceedings of this conference resulted in a landmark article, the first ever to be authored by both physicians and parents, in the medical journal Pediatrics. Soon Carol began publishing pieces about raising a blind baby and, later, about her daughter’s school years. Carol’s advocacy secured the way for Serena to attend public school in New Jersey. Serena graduated from college and recently earned a master’s degree at Rutgers.

Carol raised awareness about threats to education resources as a member of the Statewide Consumer Advisory Board of the New Jersey Commission for the Blind and Visually Impaired, and advocated for better services through the creation of the New Jersey chapter of Parents of Blind Children more than 20 years ago. On a national level, Carol served as vice president and then president of the National Organization of Parents of Blind Children, before becoming the Director of Programs in 2011. She was also the first sighted person to serve on the National Federation of the Blind Scholarship Committee.

Carol is the author of four books, The Bridge to Braille: Reading and School Success for the Young Blind Child, Because Books Matter, Making It Work: Educating the Blind/Visually Impaired Student in the Regular School, and Getting Ready for College Begins in Third Grade: Working Toward an Independent Future for Your Young Blind Child. For more than two decades, Carol has co-edited In Touch, POBC-NJ’s newsletter, and conducted parent seminars and educator training in states across the country. After several years of service on the advisory committee, Carol served for two years as Outreach and Recruitment Coordinator for The College of New Jersey’s Teacher of the Blind/Visually Impaired Program where she developed curriculum and co-taught courses.

Carol has served on the State Human Services Advisory Council and the State Rehabilitation Council and has collaborated on many projects with the New Jersey Commission for the Blind. She is the recipient of the Diana Cuthbertson Parent-Professional Collaboration Award from the Statewide Parents Advocacy Network, the New Jersey Commission for the Blind Mary O’Donnell Advocacy Award, and the National Organization of Parents of Blind Children Twig Award.